They Worked Hard for the Family: Jones Home Laundry

In this family photo from about 1930 are: back row from left Helen Marker Jones, her husband Henry James 'Jim' Jones with their three children in front, from left Frank, Maxine and Phyllis. In the middle of the back row is Jim Jones's brother Hamilton 'Ham' Jones and his wife Iva, with their two daughters in front of them, Marjorie and Dorothy. 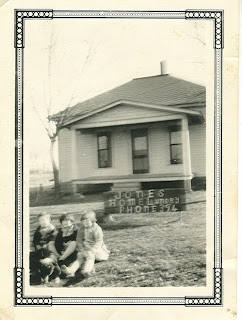 My step-mother of 46 years was Phyllis Jones Margheim, who worked extremely hard for her family from 1933 until 2 days before her death in 1997. She is pictured at 3rd from left in each photo above. She started her working days at age 9 as she helped her parents, Helen and Jim Jones in their family business, the Jones Home Laundry, touted as "The Biggest Little Laundry in Kansas". 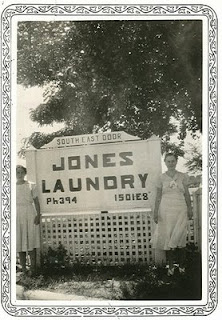 Life was difficult for most people in the U.S. in 1930 and in Great Bend, Kansas families had hard times due largely to the Great Depression. As Helen Jones was raising her family of three small children, Phyllis, Maxine and Frank, her husband Jim was working as a saleman for Snap-On Tools. To supplement their income, Helen took in laundry so she could be at home to care for her children. The laundry business grew to the point that Jim and Helen built a large building onto the south end of their house and operated it as a commercial laundry. You can see in the sign above the words"Southeast Door" at the top. This was to direct customers to the proper entrance to the laundry business. Notice too, that this was in the days when phone numbers were 3 digits: "394". The address was 1501 E. 8th St. in Great Bend, KS. 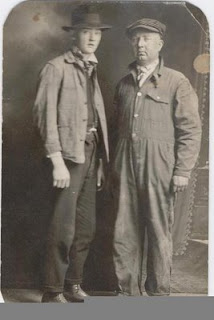 This picture shows Jim (at right) and his brother Ham Jones, who also worked in the laundry business for many decades. Compare this to the photo below of Ham (foreground) and Jim sorting clothes before weighing them in their newer laundry building about 1970. 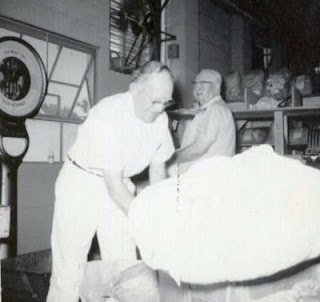 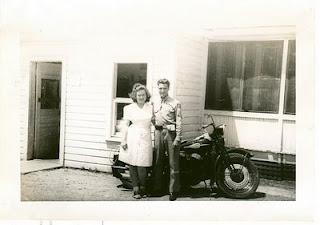 This photo shows my step-mother Phyllis at about age 20 (1944) with a boyfriend outside the entrance to the laundry. The house window is at the right end of the photo, and the laundry window and door are at her right. My grandfather Jim Jones owned and operated this laundry from about 1930 until his death in 1976. My Mom managed it and put in 70-80 hours every week standing on its concrete floors, washing, pressing and wrapping laundry bundles in heat that reached 120 degrees in the summer, and cold that reached 20 degrees in the winters. Many mornings my mom took a hammer to pound ice off the door handles so she could open the laundry and fire up the boiler at 5:30 am. She finally retired and sold the building in 1977, at age 53. She and her father certainly deserve to be featured in this story about our family members who "worked hard for the family"!

Email ThisBlogThis!Share to TwitterShare to FacebookShare to Pinterest
Labels: Jones

Such hard work done by your family members in the laundry! It's great that you have photos to share with us also. I have just finished reading many of your posts and they are wonderful. I will look forward to more in the future. Thanks.

Thanks for sharing your pictures and story. What incredibly had work. The heat...the cold...the hard work and concrete floor must have taken a tole on their health. Thanks again.

Thanks for sharing your photos and family story. Good work!

Thanks Becky for a very interesting series of family photographs which tell a great story of your parents' working lives. Regards, Brett

Please click on this image to reveal the intended photo. 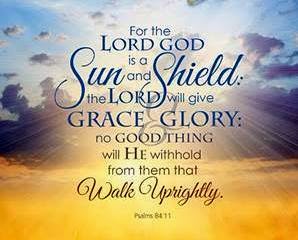 Becky Jamison
As a member of The Church of Jesus Christ of Latter-day Saints, I’m a Christian, a widow, mom, step-mom, grandma, & twin sister who loves God, family, friends, and family history.